Sweet and Sour grew a lot before it was time for them to return to the farm.  They ate their food constantly, about three bowls every day! They drank a lot of water too!  We thought they looked like teenagers when their new, not fluffy feathers began to appear on their wings.

They have hatched!  We have two lovely chicks that we have named Sweet and Sour.  They are in their box with a 'mummy hen' which is a heater for them to snuggle under.  They have begun to eat their food and also to drink the water.  When they drink they gather the water in their beaks and then put their heads up and glug it down - it is really funny!  We have stroked them and held them very gently.  They make a lot of noise in the class and are constantly chirping.

Today (Tuesday the 10th March) we had our second visit from Rand Farm to see how many of our eggs had chicks inside.  Using the torch we found we have 3, maybe 4 chicks that should hatch next Tuesday.  We can't wait!

On Tuesday (24th February 2015) we had a surprise!  We received an incubator with eggs inside from Rand Farm and we have to look after them until they hatch.  Mrs Addison hadn't told us so we were very excited.  We have to make sure the temperature stays constant at 37.5 degrees centigrade and that the water is topped up in the middle compartment.  The incubator rotates the eggs by itself every 30 minutes and the occassional buzzing motor sound has been strange this week.  We are recording the days on a countdown calender until Joe (from Rand Farm) comes back in two weeks time.  He says we will be able to see inside the eggs with a special torch.   We can't wait!

So far nothing has changed. 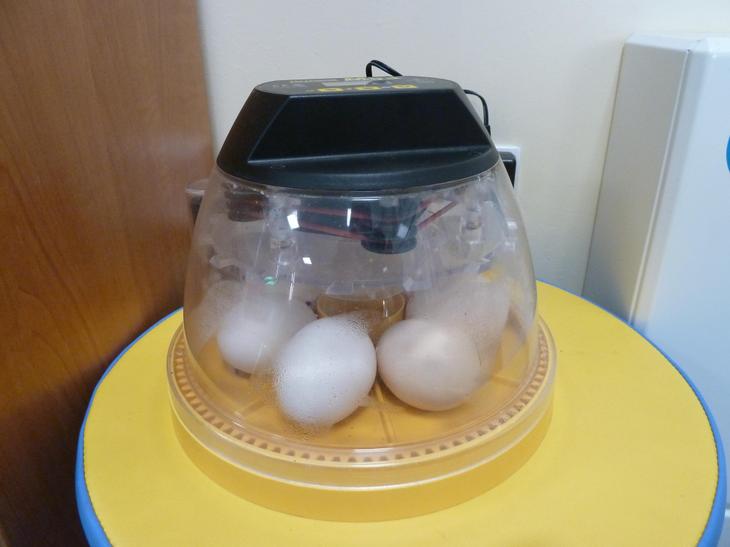