Animals Including Humans Term 5 and Term 6

As part of our unit about teeth, Pine Class used eggs to investigate the impact of different liquids on our tooth enamel because their shells have a similar quality.  We thought of our own different questions to investigate to make a comparative and fair test which included:

whilst trying to keep all other remaining conditions the same.

We will look at the results in a week's time.

A massive thank you to the parents who donated eggs and a shout out to Lodge Farm for also donating.  Thank You!

Investigating levers - where is the best place to put the fulcrum to make the load easier to lift with the least effort?

Friction Fair Test - investigating if different surfaces affect the amount of friction generated, changing either the surface dragged along, or the surface of the shoe sole.

Pine Class have been learning how living things are classified according to their features this term. They have found creating classification keys quite tricky, but have persevered and were able to create their own as well as work together in pairs.

Pine Class are observing what happens to different materials when they are exposed to water over a period of time.  Some of the materials are metal.  We are investigating the process of rusting, which is an irreversible change because it is a chemical change:- the iron reacts with the oxygen in the water.

Our questions is:  Will all the metal objects rust?

See the photos of the investigation over time below. 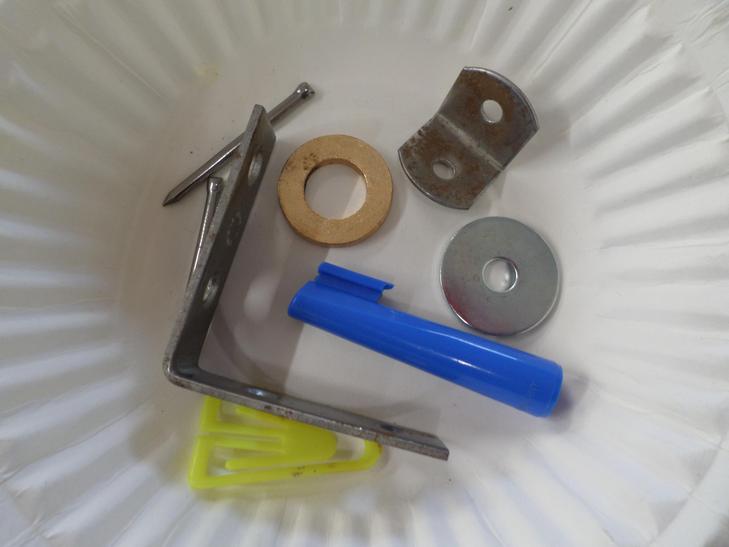 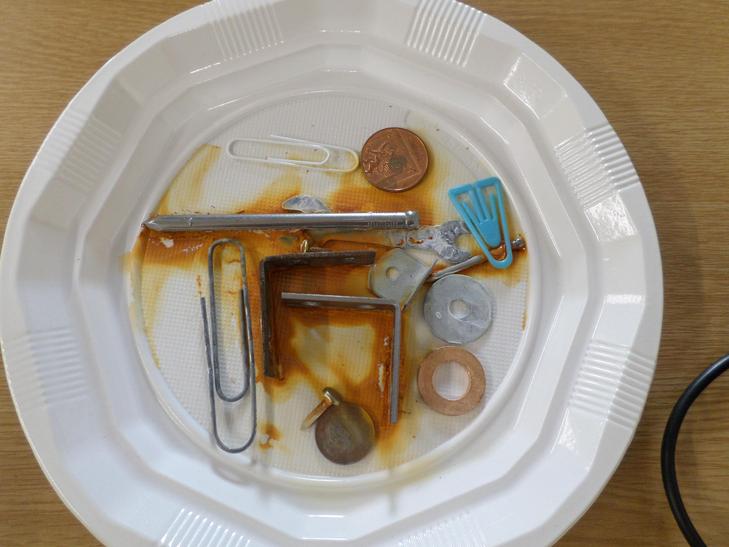 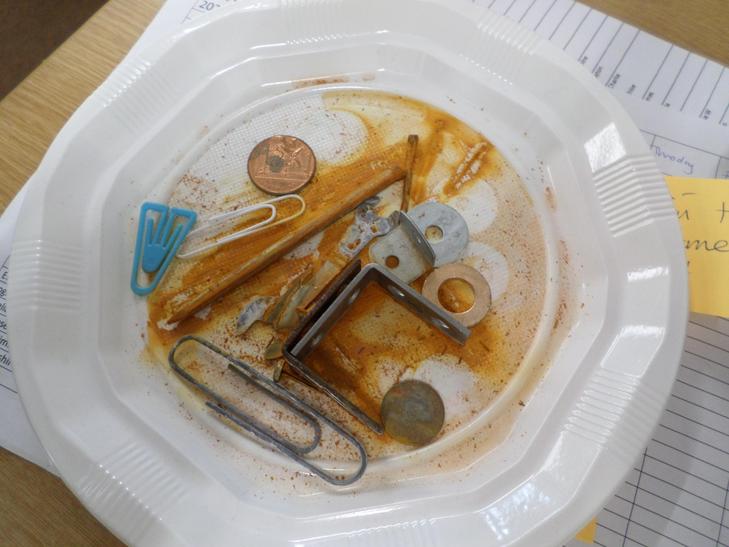 How can we slow cooling down? - finding the best insulating material

Pine investigated which materials would be the best insulators to keep Mrs Addison's coffee warm.  We decided this needed to be a fair test, with only one variable changing (the material).

We looked at the different materials first and predicted which we thought would be the best at insulating the hot water, i.e. keeping the heat in, not conducting it out.  We wrapped our cups in the different materials and recorded the temperatures at the same intervals.  Each cup had the same amount of water (measured in millilitres) and the same start temperature.   Each pair recorded their own results.

Next week we will analyse the results for the whole class by producing graphs and find out which kept the water the hottest temperature.

How can we separate mixtures?

Pine pupils were given the challenge of separating a mixture of paper clips, rice, sand and salt.

They were given different pieces of equipment to use and they had to decide how to go about it.

In order to do this, they first discussed the properties of each of the different materials.

The paper clips were removed with a magnet, because they were magnetic.

The rice was separated by using a sieve, because it was a larger grain.

The children then realised it would be very difficult to separate the small grains of sand and water.  For this they needed to add a third material, (a liquid) warm water.   This dissolved the salt.

They then filtered out the sand using filter paper (sometimes it needed to be past twice).

Finally, they used the fact that a salt solution can be heated to make the change reversible, because it is a physical change.   The solute (the salt) can be separated from the solvent (the water) by heating the water until it evaporates.

Take a look at the photos below.  They did a very good job at separating the mixtures!

After the initial 'showing what we know' about properties and changes of materials, the Pine Class pupils who didn't go on the residential trip made, and then ate, their own ice cream.

The vanilla essence and castor sugar was dissolved into the milk through stirring, then put into a sealed plastic bag.  This was then placed into a larger, sealed plastic bag that was full of ice cubes and some salt.  Gloves were needed as the bags got very cold!!   Then, the bags were shaken for quite a while, until the liquid turned into a solid due to the cold and the movement.  The milk solution became ice cream! This was quickly eaten, before it could melt back into a liquid again.

States of Matter Autumn Term One

Further investigations in this term included:

Do all liquids freeze?

We found out that the ketchup, water, salt water, shampoo and washing up liquid froze.  However the hand sanitiser didn't.  We think this was due to its alcohol content.

Where does water go?

We investigated how different conditions affect the evaporation rate of a wet cloth.   First we weighed a dry cloth, then we made it wet and weighed it again.  We hung them up in different environments inside and outside the classroom and recorded their weight and the temperature of the location over the course of the day.  Cloths in the sunny side of the class or outside dried quicker which told us the warmer the temperature, the quicker the evaporation rate.  We found out that water evaporates into water vapour.   We produced graphs to show our results.

We found out what happens when baking soda is mixed with an acidic liquid, in this case vinegar.  It produces the gas Carbon Dioxide.  This blew up the balloons when we tipped the soda from inside the balloon to inside the plastic bottle containing the vinegar.   It also created a little heat because of the energy of the reaction.

Next we filled cups with water and placed paper over the top.  On turning them upside down, the paper miraculously stuck to the cup and didn't fall.  We found out that this was because the water could not come out of the cup, unless air was let in.   The air could not get in because it was pushing the card upwards, the water pressure decreased inside the cup and the surface tension created a seal between the card and the cup.

See our pictures below. 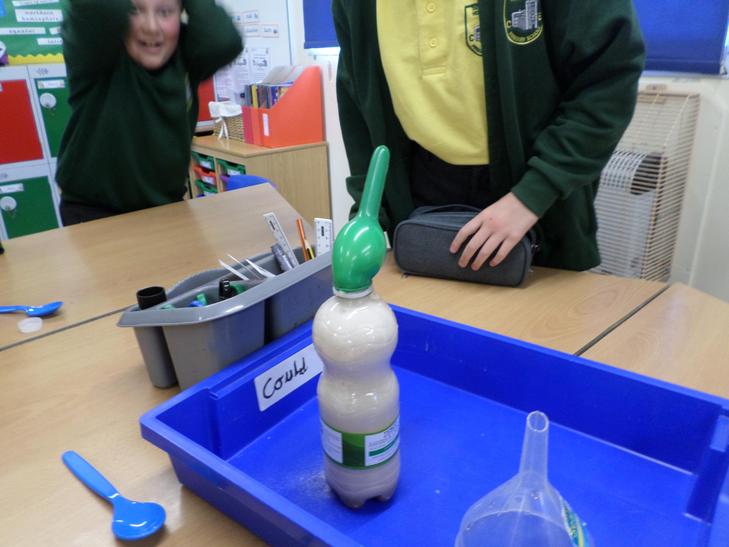 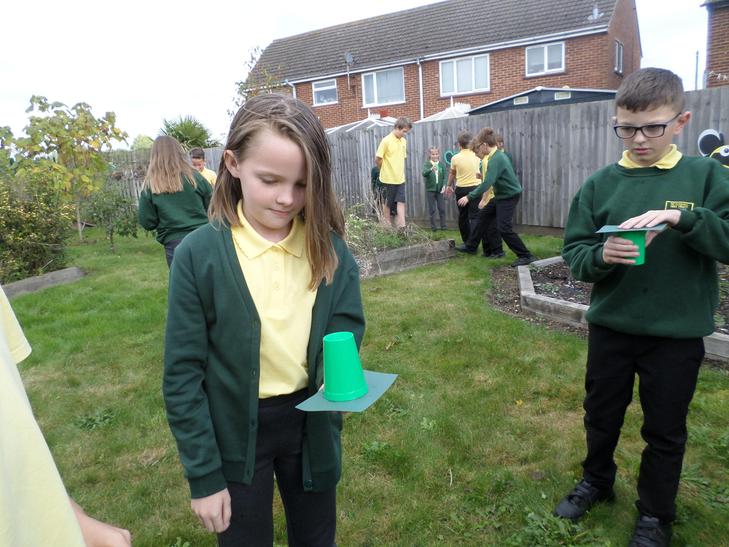 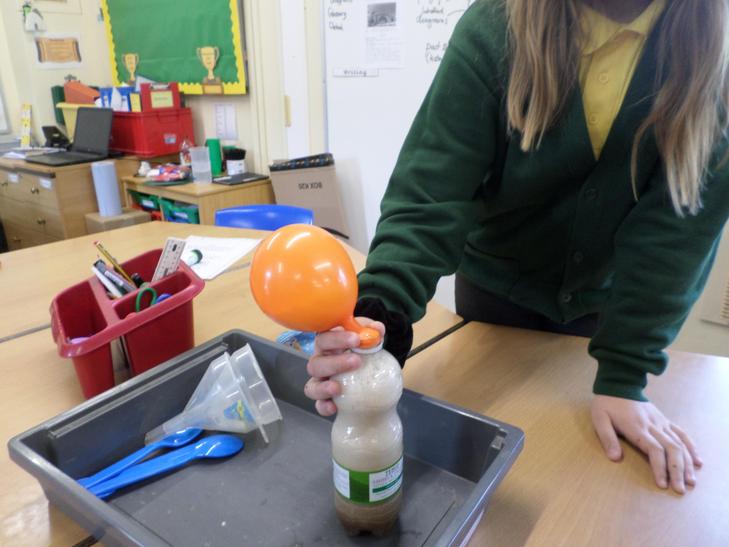 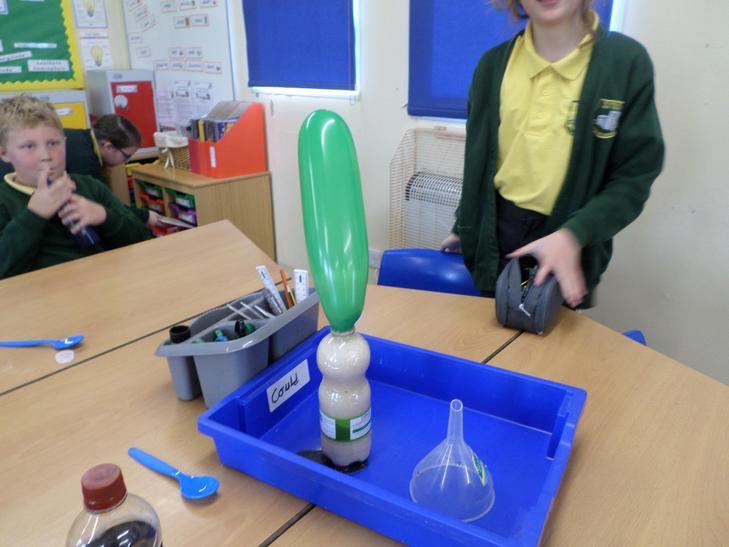 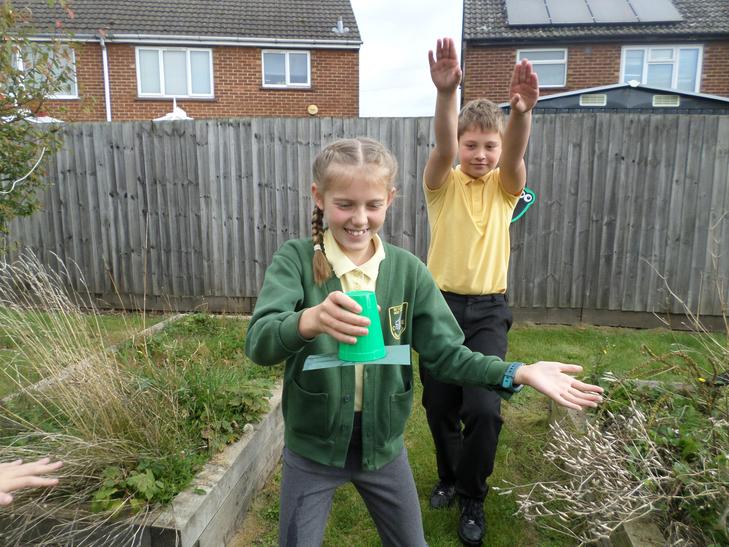 Are all liquids runny?

Pine Class investigated whether all liquids are 'runny'.  We discussed the term 'viscosity' and found out it meant how much friction a liquid had and how much resistance was created when flowing.  In other words, how 'runny' it is.   We also found out that some liquids are colloids - they have a mixture of substances, such as toothpaste or creams.  Non Newtonian liquids were also investigated.  We watched a video of a man walking on custard and found out that some liquids become solids when impacted.  This was further investigated through the use of corn flour mixed with water in class.  We also found out that this technology can be used when making protective clothing such as for motorbike riders and the scientists invented something called Armour Gel.

Pine Class have been investigating the three states of matter:  solids, liquids and gases.

Everyday items were classified and sorted into sorting hoops, however it proved very tricky and led to lots of discussion about whether an object was made of all three states.  Good thinking Pine!

We then made gasses visible, poured solids and investigated how liquids fill different spaces.